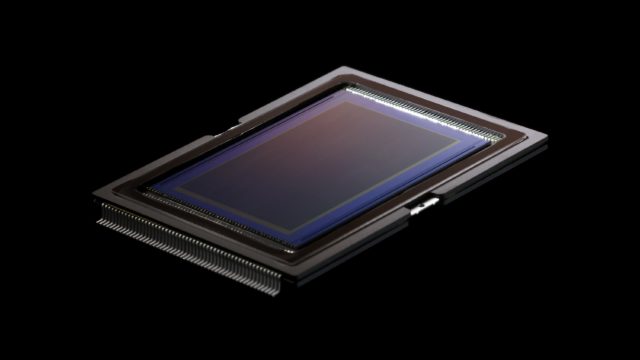 One of the most commonly discussed topics on various photography gear forums, especially among bird and wildlife enthusiasts, is the camera’s crop factor. Unfortunately, this topic is sometimes  misunderstood even among some of the seasoned photographers. Even worse, some camera manufacturers advertise short lenses on their small sensor cameras as “equivalent” to much longer and more expensive lenses. Such advertisement, while legally and technically acceptable, can be quite misleading.  In this short article. I will explain the basic and simple concept of a “cropped” sensor to help shed more light on this topic.

Crop factor does not increase the focal length.

Contrary to the myth on the internet, a cropped-sensor camera does not increase the focal length of any lens. Any lens has a fixed focal length that does not depend on the camera the lens is mounted on. A 400mm lens is always a 400mm lens, whether it is mounted on an EOS-7D Mark II or an EOS-1DX Mark II or on a smaller sensor camera via an adaptor. Focal length is a property of the optics in the lens. The crop factor only refers to the sensor size. A 1.6X crop factor (also referred to as APS-C) means the image sensor is about 1.6X smaller than the standard 35mm film on each side, or approximately 22.5mm x 15mm. A Full-frame (FF)  (1.0X crop) sensor means the sensor is approximately 36mm x 24mm. The common sensor sizes are shown in the figure below (source:Wiki). The Canon EOS-7D Mark II uses an APS-C sensor that is roughly 2.6 times smaller than a full-frame sensor in the EOS 1D/5D series (1.6 x 1.6 =2.56) as shown below.

Because the cropped image sensor is smaller, it sees a smaller portion of the image projected by the lens. Let’s assume you are shooting an owl from 18  yards away with a 500mm lens. The lens projects exactly the same image on the sensor plane of an APS-C camera and a FF camera. But because the APS-C camera has a smaller sensor, the image it captures is “cropped” relative to the image captured by the FF camera. The APS-C sensor has a narrower field of view (FOV). 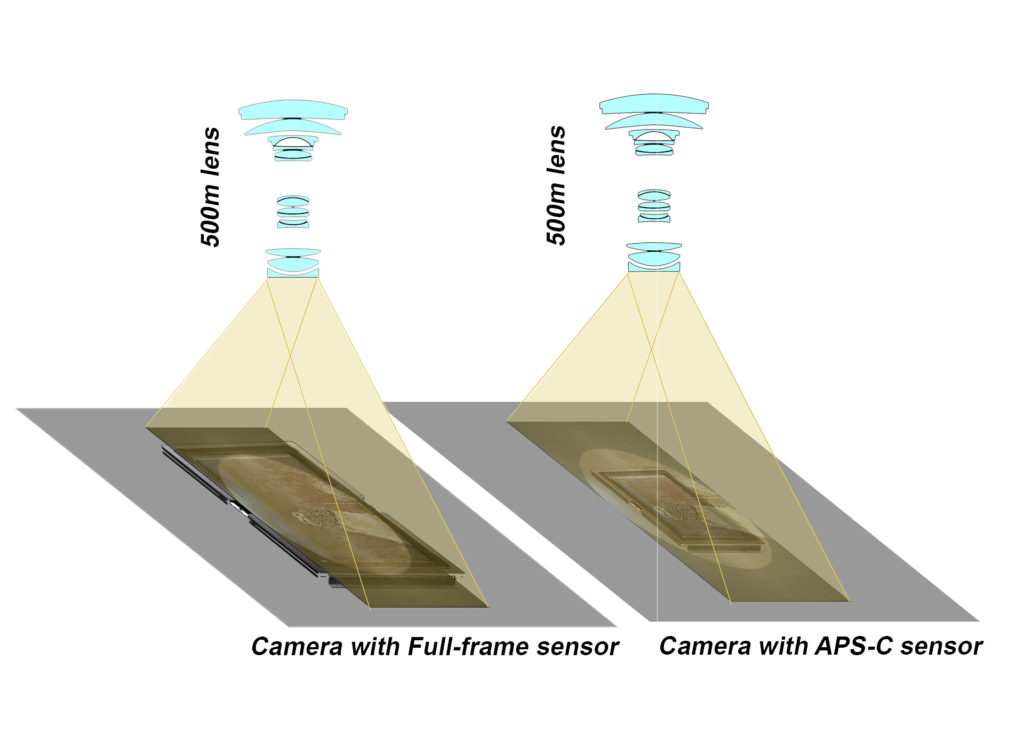 The image recorded by each sensor is shown below. 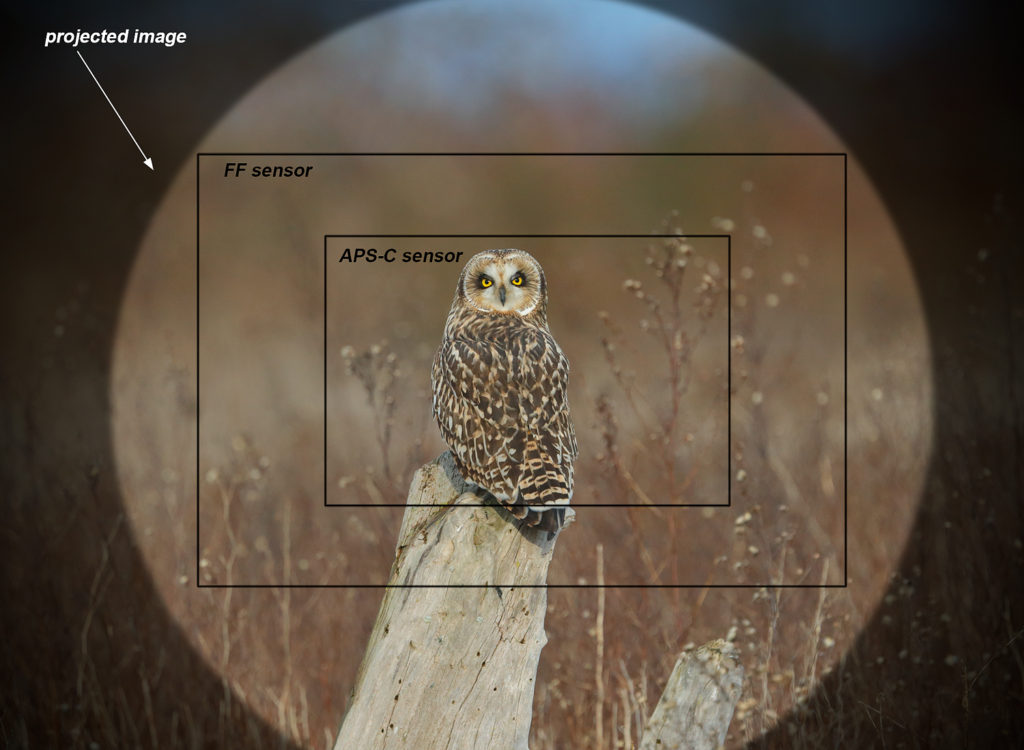 The image captured by a FF sensor compared to an APS-C sensor.

A:FF and APS-C sensor with same size pixels. (e.g. EOS 7D Mark II and the EOS-5DS R which have roughly the same size pixels). Both images will have same number of pixels on the owl.

B: FF sensor with larger pixels than the APS-C sensor.  (e.g. EOS-1D X Mark II and the EOS-7D Mark II). Image from the FF sensor will fewer pixels on the owl.

C: FF sensor with smaller pixels . (e.g. EOS-5D S R and the EOS-50D). Image from the FF sensor will have more pixels on the owl.

So it’s all about the pixel size. For example when shooting with the original  EOS-7D (APS-C 18 Mega-pixels) and the EOS-5DS R (FF 51 Mega-pixels) side-by-side, the FF image will have more pixels on the bird, even after cropping to get the same FOV as the APS-C sensor. Camera manufacturers don’t usually state the pixel size on the camera’s spec sheet, but it is easy to calculate how many pixels you will be left with when cropping the image to a given FOV. You can use this simple formula: # of pixels after cropping to a given FOV = ( total number of pixels on the sensor) / (FOV x FOV ). As an example, let’s calculate how many pixels will be left in an EOS-5D Mark IV file after cropping it to the same FOV of the EOS-7D Mark II.

The answer is : 30 Mega-pixels/(1.6 x 1.6 ) ~ 12 Mega pixels. This means each side of the EOS-7D Mark II image will be approximately 1.3 times longer than the 5D Mark IV image when viewed at 100% on the screen, in other words it is magnified by 1.3X. Note that this number is not equal to the 1.6X crop factor. Using the same math we get ~ 20 Mega-pixels for a cropped image from the EOS-5DS R. This means the EOS-7D Mark II has no magnification or “reach factor” over the high-resolution 5DS R.

The notion of the APS-C camera turning a 500mm lens to a 800mm lens is incorrect, and there is no such thing as crop factor magnification, the smaller sensor does not magnify anything. It is the smaller pixels that result in more pixels on a subject at a given distance, not the smaller sensor.

Another very important factor is that more pixels on the subject is not always equal to finer details or a higher quality image. Not all pixels are created equal.  The smaller pixels have a lower dynamic range (DR), you can think about them as smaller buckets that collect less light than a larger pixel. Such densely packed sensors are also more prone to electronic and optical cross-talk or interference between the neighboring pixels in the array. All of this reduces the quality of the signal that is coming from the sensor and eventually the final image quality. Cameras such as the EOS-7D Mark II with small pixels often suffer from lack of micro-contrast and pixel-level sharpness as well as excessive grain at higher ISO’s. The noise reduction that is required to clean up the files often annihilates most of the additional detail that has been captured by the smaller pixels. Files from cameras with small pixels need to be sharpened more to compensate for the inherent softness. Trying to get closer to your subject or using a longer high-quality lens will result in a much higher image quality than trying to farm smaller pixels on the sensor.

The 600m lens has a much larger physical aperture, obviously it is a much larger lens. The aperture area is ~2.25 times larger in the 600mm f/4 lens compared to a 400mm f/4 lens. This means the larger sensor in the EOS-1D X Mark II collects 2.25x more light (photons) than the EOS-7D Mark II. The signal to noise ratio in an ideal sensor is proportional to square root of the number of photons collected. The higher the number of photons, the cleaner the image and less grainy it will be. The difference may not visible in good light and lower ISO settings but at high ISO or when raising the dark tones of the image the difference becomes significant. Plus the larger pixels of the EOS-1D X Mark II have a higher highlight saturation limit and better micro-contrast/sharpness. The image from the FF sensor will also have a shallower DOF, again because the aperture of a 600mm f/4 lens is much larger than a 400mm f/4 lens. A shallow DOF is desirable for avian and wildlife images in most cases, as it better isolates the subject from the background. This is why the FF cameras often deliver superior image quality compared to APS-C.

So in conclusion, the sensor’s crop factor does not change the focal length, it does not magnify an image nor does it  give you more reach. It is ONLY the pixel size (or commonly referred  to by “pixel pitch”) that determines how many pixels will be left on the bird when shooting from a given distance. A 400mm f/4 lens on a APS-C camera will never be the same as a 600mm f/4 lens on a FF camera, the lower the light, the bigger the difference.

I hope this article leaves no confusion on this topic, if you have any questions, please post them in the comments section.