In the past upgrading to a new 1 series camera was a no-brainier task for wildlife photographers. This time the new image sensor brings a dilemma for wildlife photographers. The full-frame CMOS image sensor in the 1DX is approximately 70% larger in area compared to the APS-H sensor in the EOS 1D Mark IV, offering a significant advantage in SNR at RAW level. However in principal, this is only true if the entire sensor area is used for imaging, i.e. without too much cropping. On the other hand, the pixel pitch for 1DX is 6.95um compared to 5.7um for EOS 1D Mark IV’s APS-H sensor. The EOS 1D MarkIV sensor has about 44% more pixels per unit area which gives it a respectable resolution advantage on paper. Wildlife and avian subjects are sometimes difficult to approach in the field, in these cases photographers are limited by the focal length of the optics. It can be readily seen that in these cases the balance in overall image quality can tip in favor of 1D Mark IV due to its higher resolution for rendering fine details. However Canon indicate the image sensor in 1DX is substantially improved compared to the 1D Mark IV and are confident it will produce an overall superior output. I will put this claim to the test.

I devised two different tests: I first photographed the target (a decoy owl with added feathers!) at equal field of view (FOV) for both cameras. In the field this would translate to shooting from a bit closer or using a longer lens with the EOS 1DX. I used a zoom lens, the EF 70-200 f/2.8L IS II to equalize the FOV. I used manual focus in live view mode to ensure sharpest focus was on the feathers. Since the total number of pixels is close (16 Mpixel vs. 18 Mpixel), I left the RAW output at 100%. Then I shot the same target at 200mm from equal distance. This translates to the focal-length limited case. In the 1DX file the subject will have fewer pixels. Since I am interested in making large prints and displaying my files on large high definition screens, I digitally up-sampled the 1DX file to normalize the size of the subject. I used bicubic method in Photoshop CS6 which I also use for printing. I used Canon DPP for RAW conversion and removed the chroma (color) noise so that the details can be evaluated clearly. For details of processing please refer to my guide.

The lowest ISO that I use is ISO 400, I use ISO 1600 pretty frequently. I usually do not exceed ISO 3200 with my EOS 1D Mark IV, for this test I pushed the ISO to 6400 to test if the new camera raises the bar on the ISO ceiling. The results are shown in Fig. 1-3 and Fig. 4-6 for the equal FOV and equal distance scenarios respectively. 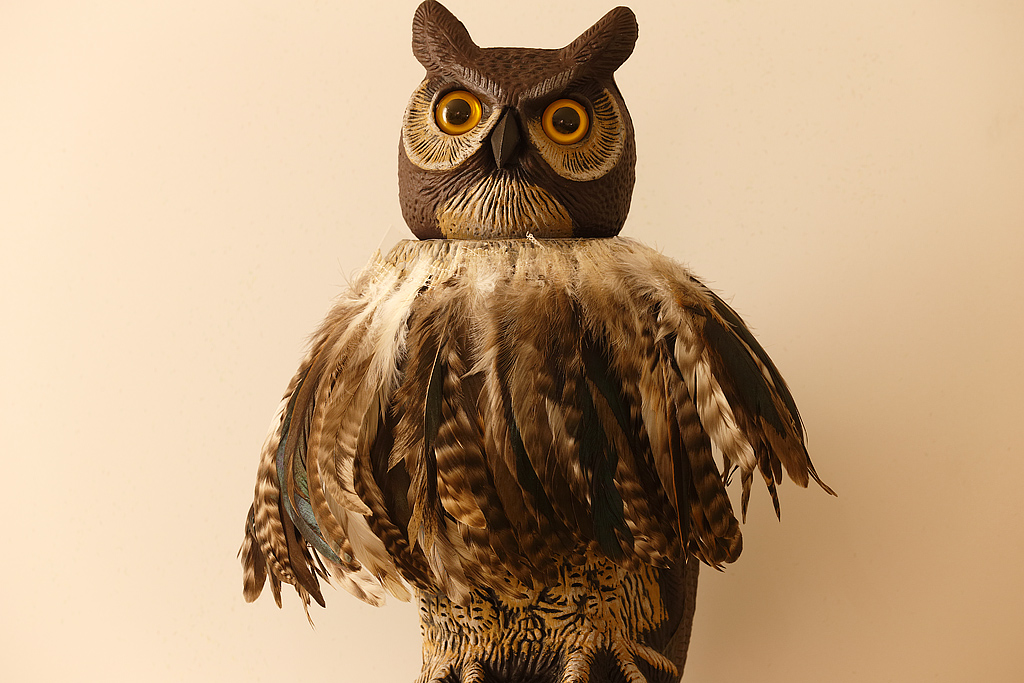 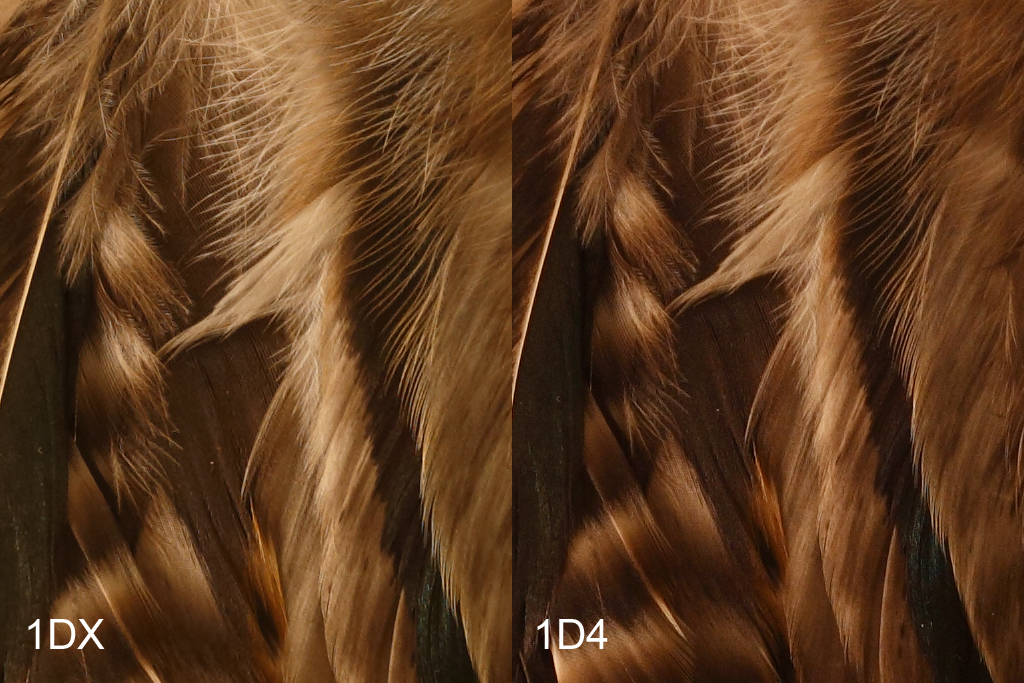 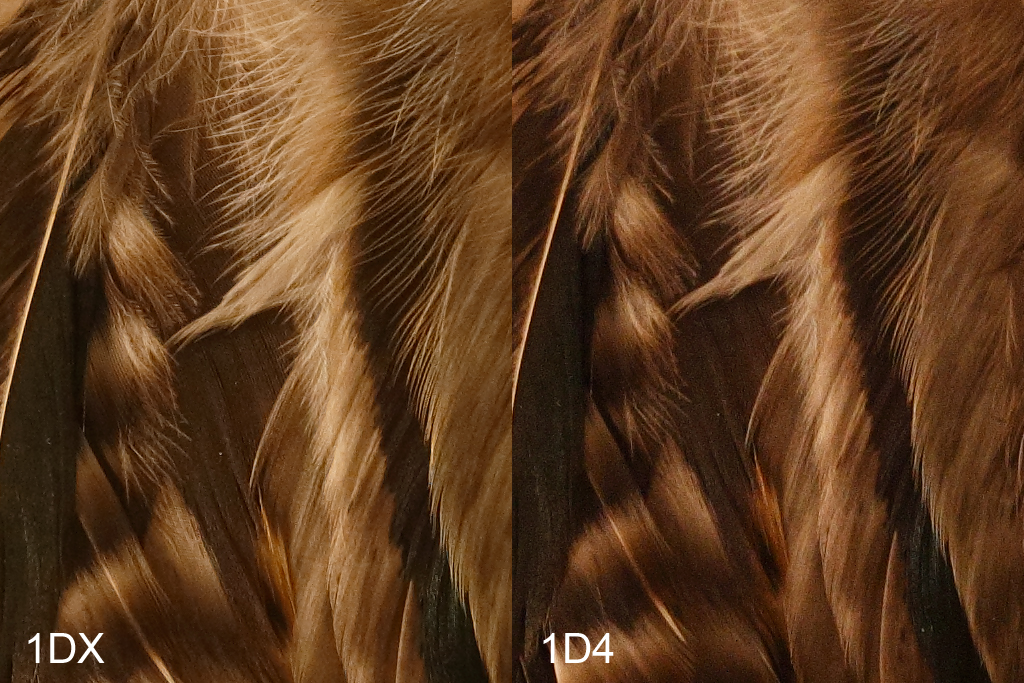 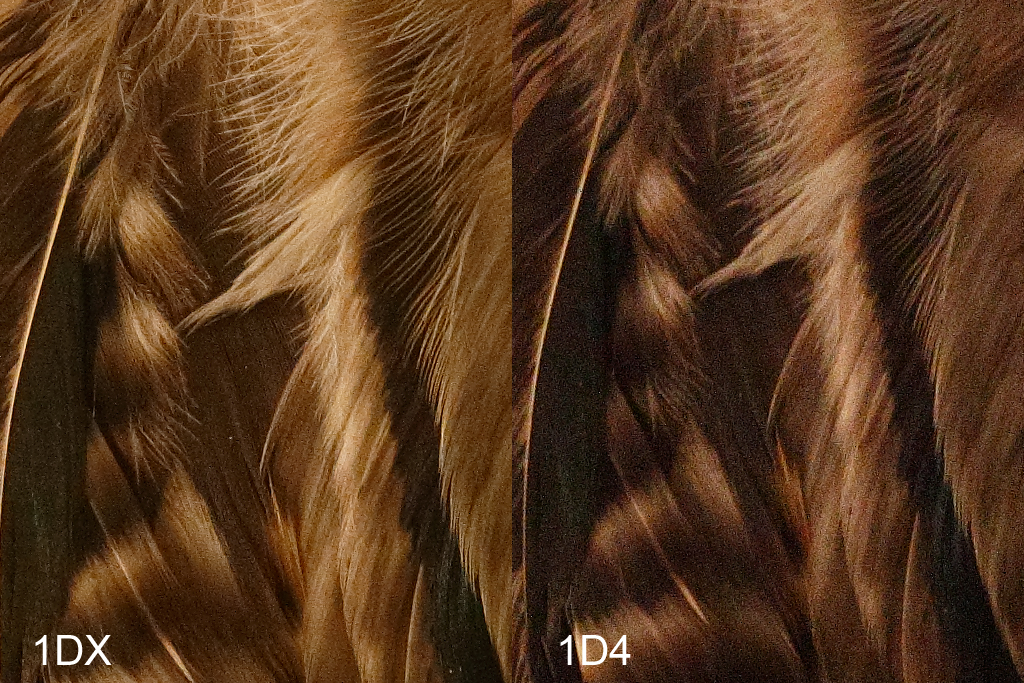 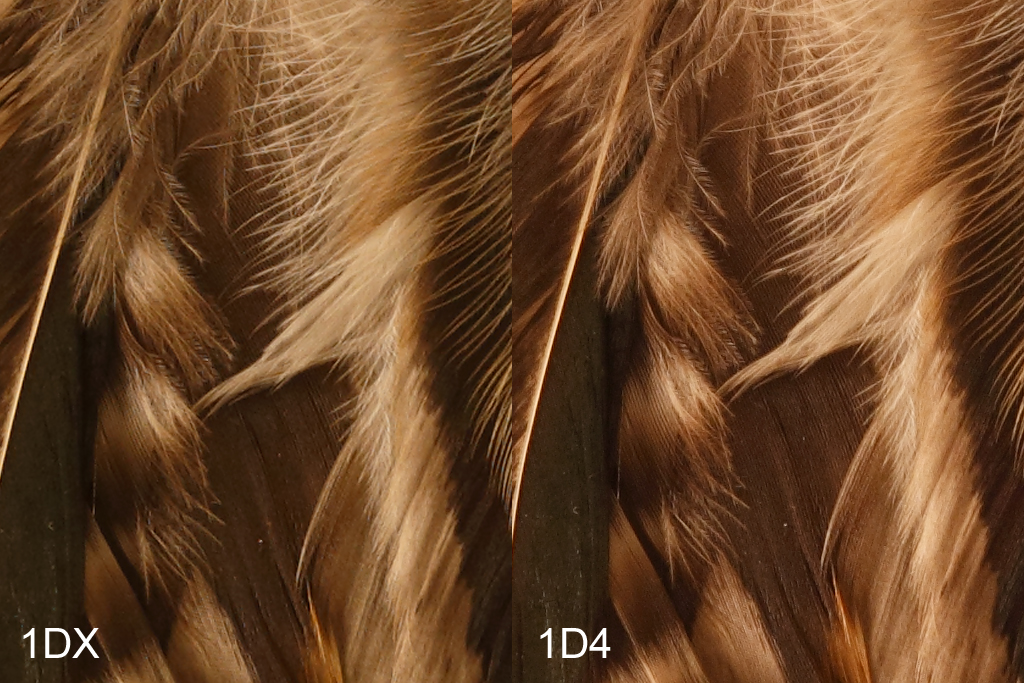 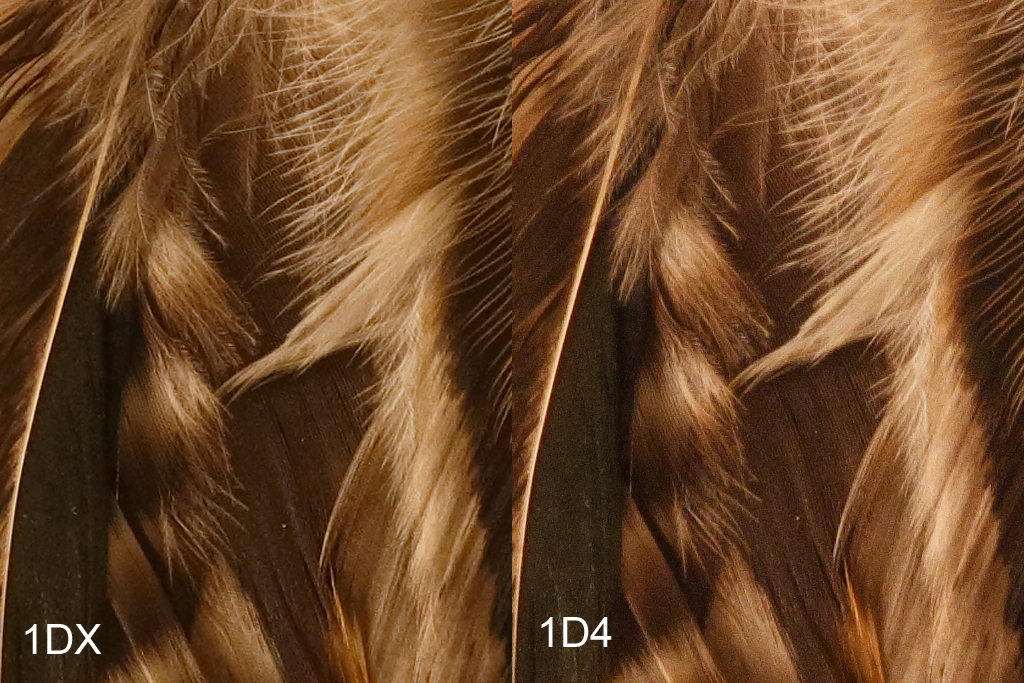 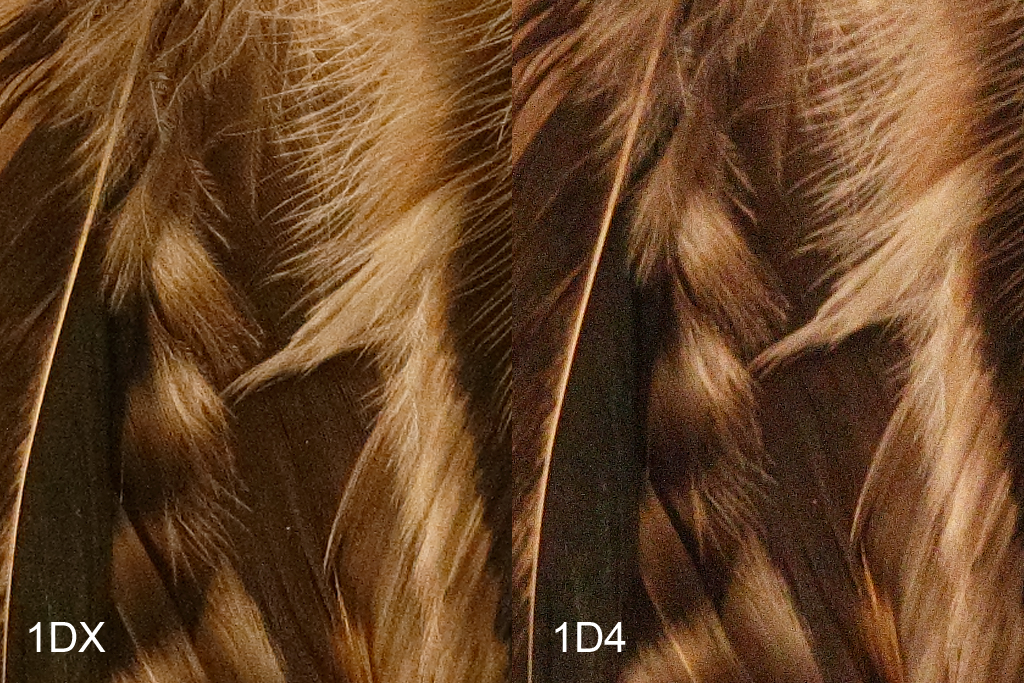 There is no surprise that the EOS 1DX is superior in the former scenario. Visual noise levels remain comparable at ISO 400, the 1DX starts to pull ahead at ISO 1600. At ISO 6400, the EOS 1D Mark IV fails to deliver a useful image with feather details annihilated by poor SNR. The EOS 1DX however still maintains a usable image that is significantly cleaner. I consider this ISO usable for my work.

The latter test is more tricky as you might expect. At ISO 400 the EOS 1D Mark IV’s higher pixel density does render finer details while visual noise level is comparable. At ISO 1600 the two files are closer while 1DX file looks cleaner despite the modest digital up-sampling and even shows ever slightly more detail in some areas where contrast is low. At ISO 6400 it is again a clear win for the EOS 1DX (notice how EOS 1D Mark IV has lost feather details).

So we can see that, even in the focal length limited situations, the EOS 1DX performs better at higher ISOs. This proves that Canon have made measurable improvements to the image sensor, or the readout circuit or both. In contrast, I did not see such improvement when comparing EOS 5D Mark III with EOS 5D Mark II.

Real-world avian photography is a combination of very different situations on the other hand. When I traveled to Haines, AK last month for photographing bald eagles, the eagles were close such that often we had to take off the tele-extenders to avoid clipping. Even without the extender, some frames were clipped due to the eagles’ size and proximity. In contrast, when I photograph white-tailed kites, the small skittish raptors in California, I usually use the tele-extender 1.4X all the time and prefer working with longer focal lengths. Therefore, I do not personally believe avian photography can be labeled one way or the other. There will be situations where the EOS 1D Mark IV will produce a file with finer detail overall but there are probably more situations where the EOS 1DX will produce a higher quality file for flight photographers who rely on higher ISOs frequently. The other important factor is the Auto Focus performance. Images with soft focus cannot produce a high quality output. A RAW file that is tack sharp makes a significantly better print as well as online presentation, even when compared to a slightly soft RAW file with twice as many pixels. So in my opinion, a real improvement in AF performance for a flight photographer far outweighs the pixel density arguments above.

Next I will examine the field AF performance of EOS 1DX in comparison to my trusty friend, the EOS 1D Mark IV.